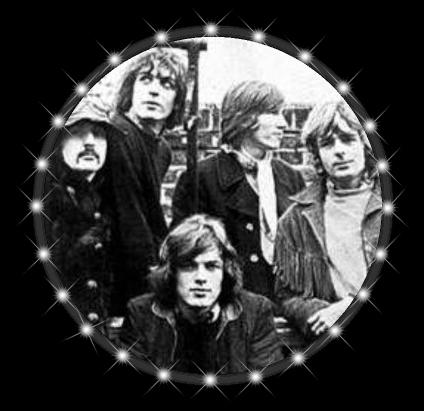 
Has 8 children....4 with his first wife Ginger, 3 with his present wife Polly, and Charlie who is Polly's son by her first marriage.

In contrast to Roger, Dave was reared by permissive and easygoing parents. At 13, he was given a Spanish guitar by a neighbor and so the journey began. Dave's greatest musical asset is his sense of feel and timing, according to one former member of Jokers Wild, and to some present day fans, we would have to say that his talents reach beyond that to include a marriage of heart to guitar and tender concern for humanity.

When Dave was a young teenager, his father's profession drew him overseas, to the U.S., leaving Dave to independently fend for himself....playing U.S. military bases with Jokers Wild, and working odd jobs, including his famous stint as a male model. All of this helped to instill in Dave, his underlying grit and a single-minded determination to succeed on his own terms...that was to resurface during the Floydian 'wars' much later....and it was to carry him through in the future, to the ringing of a Division Bell and beyond.

Dave enjoys flying, among other interests, and his collection consists of vintage aircraft that he has shown, and flown, at various airshows. His first love, however, is still his music.


Nick has four children; two daughters (Holly and Chloe) from his first marriage and two sons (Guy and Cary) from his second.

Nick was born with the proverbial silver spoon in his mouth. He accompanied his father to Vintage Sports Car Club events at an early age, and later inherited and developed his passion for racing and collecting vintage automobiles. At the Frensham Heights boarding school, it is said Nick is still remembered as a world class mischief maker.

Today, Nick races Ferrari's, Bugatti's, and Maserati's, among others that he also races and owns for his own enjoyment.


Rick had 3 children, Gala, Jamie, and Benjamin. He was married to Millie.

For Rick as a young man, he was at a loss for a career to pursue at the prep school he attended, until someone suggested architecture. The Regent Street Poly is where he met Nick and Roger. Rick didn't want to be an architect however, he wanted to be a musician... the rest is history. Rick came back to life, so to speak, with TDB... he co-wrote WTIO with Anthony Moore, and co-wrote Cluster One, WDYWFM, Marooned and KT with Dave.

One of Rick's favorite things to do was to get away on his 65-foot sailing yacht whenever he had the opportunity.


Roger has 2 children, Harry and India. Has been married to Jude and Carolyn and recently split with Priscilla. Roger's father was killed in action at Anzio, only a few months after he was born. As a young teen, Roger's pursuits included playing with toy guns (& shooting real ones), and staying up at night listening to his radio tuned to Armed Forces Network or Radio Luxembourg.

He did not like apprenticeship as a naval cadet, quit, and was given a dishonorable discharge. He instead became chairman of the Campaign for Nuclear Disarmament's local youth chapter.

Roger's life from the beginning, and still is, a conscious and unconscious mourning for the father he never knew, and hatred of the hierarchy of circumstances that robbed him of his father.

While Roger's lyrical 'brilliance' of the past cannot be denied, his inability to come to terms with his grief and hatred eventually wore out its welcome with the majority of his fans. Roger quit Pink Floyd in the mid 1980's.


Syd had a normal childhood and loving parents. He was a popular and successful student, and his passions ranged from camping and sports to drama and painting. He was once a Boy Scout patrol leader.

Dr. Barrett encouraged Syd's musical interest with the gift of a banjo, and later, a guitar. Dr. Barrett died when Syd was just 14. It's been proposed that this trauma was the first 'catalyst' in Syd's eventual dementia.

Syd and Dave were friends at a very early age, and while attending school, they would hang out together, teaching each other guitar....Dave was the better guitarist, and Syd's talent lay in words and lyrics...they would flow from him easily, according to Dave.

The founding member of the band that so many today admire and respect, a once brilliant mind destroyed by drugs. Syd is a legacy and a lesson for all.

Syd passed away on July 7, 2006 due to complications from diabetes.


IN MEMORY OF SYD

Page last updated on: 9-15-2008 - Copyright BWP 1998-2010
All pictures and texts are copyright to their respective owners and cannot be used without permission.